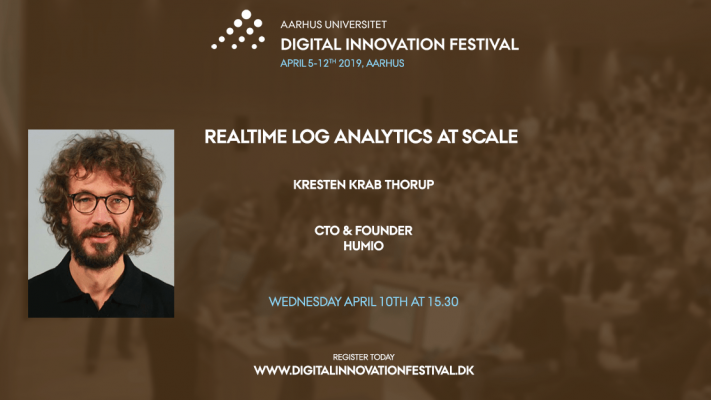 Aarhus might be considered Denmark’s version of Silicon Valley. Aarhus University has organised a digital innovation festival, which will take place from April 5 to April 12. The purpose is to focus on today’s most hyped technologies, such as artificial intelligence, drones, AR, blockchain and cloud computing.

Aarhus University has gathered a number of Aarhus companies and entrepreneurs to give a presentation at the festival. You can meet the companies such as UNSILO, Luxion, Scalgo and Toitware.

On April 10, you can meet Kresten Krab Thorup – a computer scientist from Aarhus University, who has previously been employed with the IT company, Trifork. Together with two former colleagues, he started the Aarhus company, Humio, in 2016 and last year they multiplied their annual revenue.

The company specializes in creating a system for analyzing massive amounts of log data in real time, and currently they have companies such as Microsoft, Bloomberg and Norwegian Sparbank 1 on their customer list. From the local tech community in Aarhus, customers include Lunar Way and Lix. Today the company employs 35 people in offices in Aarhus, England and San Francisco.

The company got its international breakthrough in January this year when the US venture capital fund, Accel, invested DKK 59 million DKK in Humio. The majority of Accel’s investment is to be used for development and to build up a sales organization in the US, while the developer team will remain in Aarhus, as they are convinced that they cannot find better developers elsewhere.

Today, log files are often spread out over many different servers in the cloud and it can be difficult to get an overview of valuable data logged due to resource constraints. Humio aggregates and visualizes data in real-time which gives the customer live insights into the operations and health of their systems. The software is sold as a license paid annually.

At the tech festival, Kresten will tell the whole story of Humio, how it happened, what they deliver and what their vision is. Kresten has a PhD in computer science from Aarhus University and has worked with various open source projects. Before working at Trifork in the 1990s, he also worked with Steve Jobs in his NEXT project.