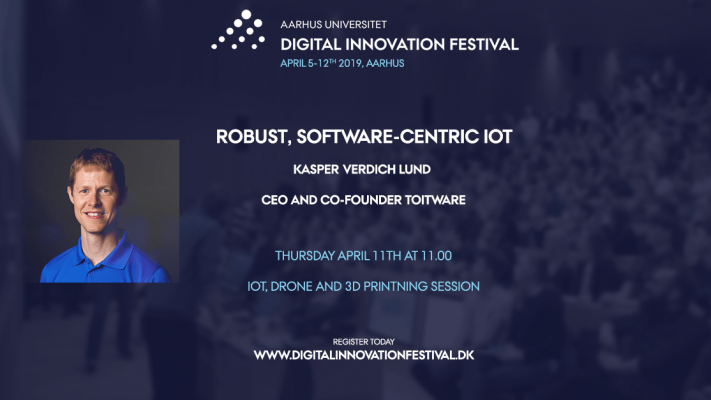 Small IoT units currently making their way into industry and into our homes They can do anything from monitoring in industry to setting the room temperature in our home. But it is also a known problem that IoT devices can pose a security risk, as security is not incorporated into the devices from the beginning.

How do you create a robust operating system for IoT devices? Get the answer from Kasper Verdich Lund, when he joins Aarhus University Digital Innovation Festival from 5 to 12 April, 2019.

Until recently, Kasper was part of Google’s development office in Aarhus and together with another Danish Google developer, Lars Bak, he has helped develop the engine behind Google Chrome. The two Aarhus developers have left the engine room at Google and founded the start-up company Toitware. The purpose of ToitWare is to develop a new robust programming language called Toit, which will allow the maintenance and upgrading of an IoT network consisting of thousands of small devices without compromising the security. That this business idea is good was confirmed just before Christmas, when Swedish venture fund Creandum invested 23 million DKK in Toitware.

There is a limited number of seats available, so register today!
Register
Close Menu